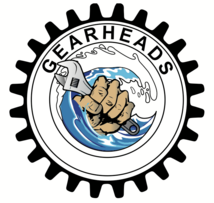 Check out Gearheads on Yelp

* Packages will vary based on year, make, model 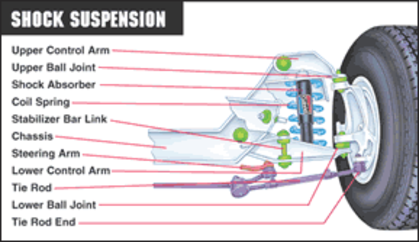 SUBMIT FORM BELOW AND WE'LL RESP0ND WITH AN ESTIMATE 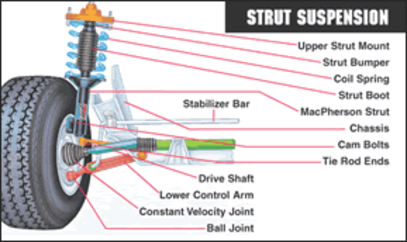 HOW DO YOU KNOW WHEN YOUR STRUTS AND/OR SHOCKS ARE BAD?

​1. Knocking noises when driving over bumps. The struts are solid units that allow the chassis, wheel assembly and body to move cohesively when a bump is hit while driving. When the strut begins to wear out, it will produce a knocking or clunking sound that can be very noticeable. The strut is filled with an inner shock, bushings, and supporting components that eventually wear out over time. When compressed, the knocking sound that is often heard is caused by the strut "bottoming out" or metal-to-metal contact. If you notice a knocking or clunking sound coming from an area near the front or rear tires, it's most likely due to worn out or broken struts. Contact a local ASE Certified mechanic as soon as possible to correctly diagnose and replace the struts if needed.

2. Car has a bumpy ride. Similar in cause to the above symptom, a rough or bumpy ride can also be an indicator of worn out or broken struts. It can also be a symptom of other parts of the strut assembly such as bushings, shocks or mounting hardware associated with the struts. Either way, when the strut is worn out or broken, one of the first things you'll notice is a much rougher ride. In fact, you'll most likely feel every bump and crack in the road when your struts have failed completely. If your overall ride is becoming bumpy or rough, contact YourMechanic so they can road test, diagnose, and replace the strut assembly if needed. Like most suspension jobs, it's important to replace both sides of the vehicle at the same time. You don't have to replace front and rear at the same time, but make sure the same axle is replaced together.

3. Floating front end. Another symptom of a bad strut assembly is a floating front end, or when it pulls to one side. Typically this is an indication of front end alignment that is faulty, however the issue is typically caused by a strut assembly that has worn out. If you take your vehicle to the local ASE certified mechanic to have the front end alignment checked, the majority of the time a broken strut will be the cause.

4. Uneven tire wear.As indicated earlier, extensive tire wear is common when the struts are worn out. Because your car isn’t absorbing the shock like it used to, your tires are going to take more of a beating. Not only that, but the wear will be uneven since the load isn’t being absorbed as it should. It's recommended to have the suspension fixed first before replacing new tires, have the suspension aligned, and finally have new tires installed. This will extend the life of the new tires and ensure safe driving.